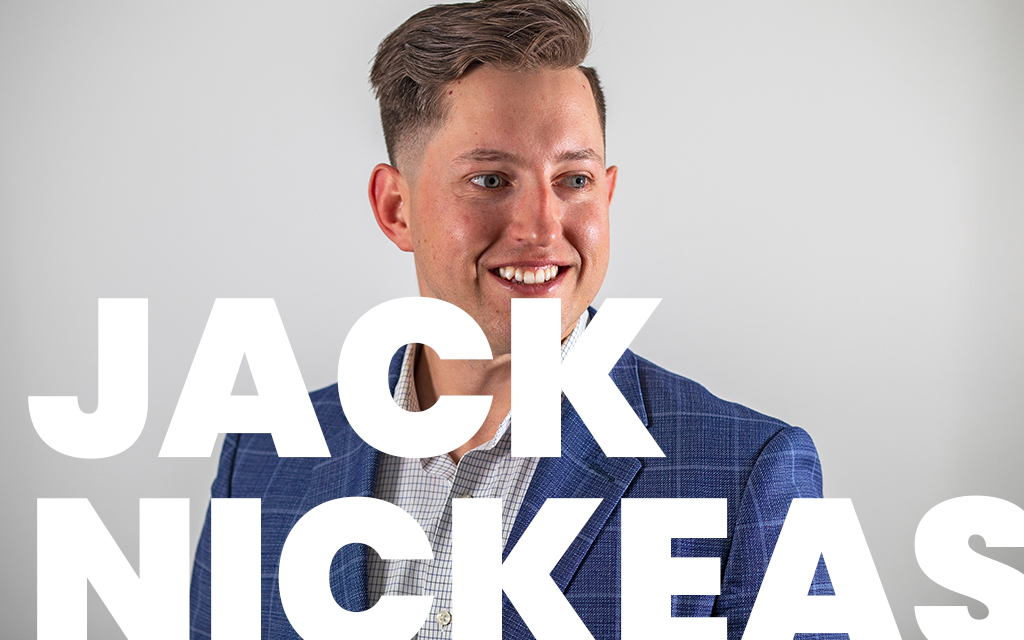 Welcome to our new Concept Co. blog series, “Meet The Team.” We do a deep dive on all of our clients, so it’s only fair you get to know a little more about us, too. So, meet Jack Nickeas. He’s part-project manager, part-account executive, and 100% awesome.

Born in Franklin Park, Illinois, a small suburb outside O’Hare International Airport, Jack resided here for about eight years before his family moved up to Greenfield, Wisconsin. From there, Greenfield became home through high school before following in his older brother’s footsteps and joining the United States Marine Corps.

Off Jack went to basic training in January 2009, and he spent the next four years primarily in North Carolina. He trained all over the U.S., however, including in Virginia, California, and Maryland. Jack also went overseas to Afghanistan for roughly seven months.

He believes the entire experience was beneficial and influential regarding what would come next on his professional journey. “I was 18, 19, 20, and probably given a heck of a lot more responsibility than I had earned up to that point. I learned a ton, from basic [training] things that you’d expect military members to know—like leadership, discipline, and attention to detail—but also a lot of very transferable skills to the civilian side, like small team leadership, personnel management, and even some logistics,” said Jack.

Time to hit the books

As soon as he made it back to the Midwest, Jack felt ready to go back to school, despite not knowing what he wanted to major in and enter the civilian workforce. A combination of business, marketing, and sales did the trick. From leading community-based projects to participate in national-level sales competitions, he spent his time at the University of Wisconsin-Parkside getting his hands dirty whenever possible to build connections.

These networking opportunities Jack created for himself led to him landing his first and second major roles and the transition into his current position at Concept Co. What’s more? He worked with Peter Knight, Ph.D., Dean of UW-Parkside’s School of Business, to turn their sales certificate into a full-blown Marketing degree with a Sales concentration. Recognizing that many people leave college and accept their first position with business degrees in some sort of sales environment, there was a clear need. UW-Parkside is now one of the only schools in southeastern Wisconsin providing this type of formal sales education.

“I learned very quickly through my formal education that sales is problem-solving,” said Jack. “If you can look at it that way and go into a conversation, identify a problem, and provide a solution, you’re not selling anything. You’re just helping someone out. So that’s what I did.”

He excelled at sales by perfecting the basics, which brought him to his first outside sales job after college with Tom James Company, a longtime outfitter of bespoke clothing for men and women. In selling custom apparel to busy professionals, he discovered how to creatively get in front of these people and sell, sell, sell.

Jack’s biggest takeaways from that opportunity were the power of the mind, the importance of gratitude, and the beauty of networking. “You have to have control of your thoughts, self-talk, goals, all of those things,” he said. “To this day, I remind myself it’s good to have goals in front of me that I’m working on,” Jack said, in order to stay motivated and continue to grow.

A match made on Milwaukee St.

In that line of work, Jack got to meet and establish relationships with several very successful people—one of which was none other than Zach Beaman, CEO and Creative Director of Concept Co. Before joining forces, however, Jack took a position at Foxconn, where he transitioned from business development and sales to promotions and project management.

After working on a unique, statewide, academic competition, called “Smart Cities, Smart Futures,” Jack had an opportunity to lead a website task and put together a marketing and promotions plan. A lightbulb went off, and he reached out to Zach. Long story short, Foxconn hired Concept Co. to build the website they needed and activate the brand. “They did a bang-up job for us—built a killer website, helped us ideate and plan out a campus tour, as well as a social media strategy with live posts,” said Jack.

As the company he was working for began to downsize, Jack began the search for his next gig. Let’s just say the timing couldn’t have been more perfect.

In a role that requires a significant amount of face-to-face time with clients, Jack seems to have a special knack for engaging and interacting with people. “It’s always come pretty naturally to me; I love it. If I didn’t have that connection with our clients, I wouldn’t be as excited about my job,” he said. “One of my favorite parts about this role is delivering the work we do and seeing how well it’s received by the clients—and watching them become more successful as a function of our work.”

Another thing he loves? Getting to sit down in a room with a client, learn about their industry, hear about what they’re struggling with, and immediately start thinking about how we’re collectively going to be able to help them. Jack also really enjoys being in the room during internal creative discussions. “Seeing how the team comes to the table with ideas and turns them into life, that’s one of the cooler parts of the role,” he said.

Outside of the office, Jack spends his time out on the water and relishes living close to a number of different lakes in and around Oconomowoc. He also enjoys hitting up nearby trails with his mountain bike and doing DIY projects around the house. Quality time with loved ones, including his dog, Murph, are how he spends the rest of his free time. “I’ve got my hobbies, but my passion is spending time with friends and family, living the American dream,” said Jack.